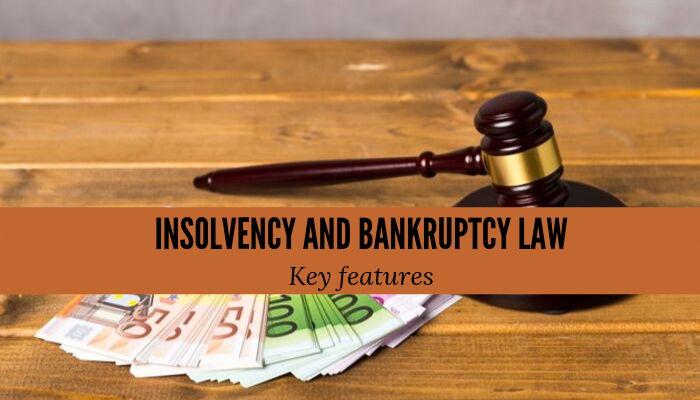 Bankruptcy is a legal process by which individuals or business organization seek relief from their creditors when they are not able to repay their debts. With the aim of creating a single law by consolidating all the existing laws on insolvency and bankruptcy, Insolvency and Bankruptcy Code was introduced in the parliament in 2015 and ratified by it in August 2016. It became a law and has come to be known as ‘Insolvency and Bankruptcy Code 2016 (IBC)’. It is a single window resolution process for bankruptcy and insolvencies, which earlier took a lot of time and was not economically viable as well. The Code aims to resolve bankruptcy and insolvency cases in an efficient and timely manner and at the same time protect the interest of small investors.

The key features of Insolvency and Bankruptcy Law have explained below.

At the core of the insolvency and Bankruptcy Code is effective and timely resolution of cases. As such, a definitive time frame has been set for different types of cases. The insolvency processes for individuals, partnership firms, and companies are separate.
For individuals, the time limit is 90 days within which the process should be completed with a provision to extend the deadline by 45 days. For companies the time limit is set at 180 days with a provision allowing an extension of 90 days, provided a majority of the creditors agree to it. For start-ups (excluding partnership firms) and other companies with assets less than 10 million, the process has to be completed within 90 days with a one-time extension of 45 day allowed.Both the debtors and the creditors are allowed to initiate the insolvency resolution process.

Adjudicators for Insolvency and Bankruptcy

National Company Law Tribunal (NCLT) was set up by the Government of India under the Companies Act 2013 and came into effect from June 2016. It started with 11 branches with its head-quarters in New Delhi and regional branches in different cities throughout the country. It now has 27 branches spread all across the country. It is a quasi-judicial body entrusted with the job of adjudicating insolvency issues pertaining to companies and limited liability partnerships. One can appeal against the decision NCLT to the NCLAT- National Company Law Appellate Tribunal.

Debt Recovery Tribunal was created to help banks and other financial institutions recover their bad debts quickly and efficiently. Banks and financial institutions which have difficulty in recovering the money they have lent out to individuals or partnership firms can approach the debt recovery tribunal for speedy resolution. On the other hand, borrowers who are aggrieved by actions of the bank to recover their money can also approach the DRT.

The procedure to initiate an insolvency proceeding, either by the creditor or the debtor, is to submit a plea to NCLT which has 14 days to either accept or reject the plea. Once a plea is accepted, an Insolvency professional is appointed to prepare a resolution plan within 180 days. In case the resolution plan fails to revive the distressed company, process to liquidate the assets of the insolvent company is initiated in the court.

Understanding the Basic Bail Process for Your State!

Amy Jones is an expert legal advisor working at Ahlawat & Associates, a well-known law firm in India. She is one of the foremost lawyers in India who loves to help people in all aspects of the practice area.