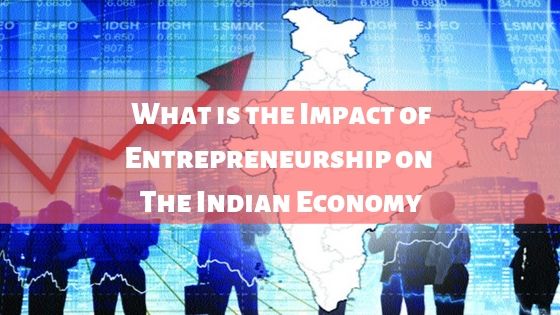 It is rightly said that people are of utmost importance in everything you do. If you have got the right people, business models and product will surely find a way into the market. There are numerous youth and fearless entrepreneurs in India that have taken huge strides to bring about a positive change in the economy of the country. On a deeper insight, entrepreneurship is the driving force in the market. However, there are people who have the idea that entrepreneurship is all about the struggle of a man to start a project or business on his/her own, it isn’t true. The struggle is far behind and the main focus should be on the growth it offers to the country.

Right from gathering workforce, funding, resources and creating an organisational structure, these are the things that encompass the idea of entrepreneurship. What still remains a question is how the practice actually benefits the Indian Economy.

Entrepreneurs are rightly known as national assets and individuals who are motivated to a great degree. These are the people responsible for changing the way of life of the people in a country. They aren’t only adding to their own account with a successful venture, rather they create wealth in the society with these ventures. For the jobless, these entrepreneurial ventures are boon due to the immense job opportunities that come in the market. More jobs are always reflective of a well-balanced society and one that is geared for progress. If the production function model is to be taken into account then entrepreneurial capital is truly of great importance to the entire nation. In India, innovation has taken leaps and bounds of growth in the fields of IT, Education, Health care, etc due to the numerous start-ups in these domains. If you take a closer look, innovativeness has achieved more growth due to the reign of entrepreneurship. There are numerous competitors in the same domain and hence the need for something new and added quality is always rife in order to gain more market space and popularity. Here are some of the major impacts that entrepreneurs have on the Indian economy. Read on to find out-

The idle savings of the people are mobilised by the entrepreneurs by providing them with new opportunities. Resources are employed so that people can set up their own enterprises. With these kinds of entrepreneurial activities, value addition the wealth of the nation is assured. Such creation of wealth adds to the industrial and economic growth of the nation. More capital formation means that a noticeable increase in the overall production of the nation.

If success is to be achieved in entrepreneurial ventures then it is to be understood that the work will need more than two hands. Varying skills sets are needed for a project to become successful and this is where a new scope for jobs opens up to the people. Thriving business setups makes sure that the job queues are cut to half in a particular geographical area. Given the fact that unemployment at a large scale in an unending problem prevailing in the country, skilled and technically qualified people are sure to land a job with these opportunities.

India vs. Bharat is a debate that has been prevalent for a long period of time and truly the difference in the growth of rural and urban areas is immense in the nation. However, 73% of households are in the rural area and this is why there is a need for balanced regional development. Entrepreneurial ventures remove the disparities between rural and urban areas with the help of industrialisation. The benefits from these ventures lead to community development such as road, education, health, and entertainment. Dwelling habits in slums and congestions are reduced as they have job opportunity and can sustain a better living.

Monopoly takes growth when the industrial set up is more prevalent in the nation and hence the economic power is only within the hands of selected few. Through entrepreneurship, economic power is distributed to subsequent contributors and hence the wealth is no longer decentralised. It makes society a lot more balanced and paves overall development.

Increases GDP and per capita income

Every entrepreneurial venture adds to the economy of the nation. Every new innovation in the market is improving the quality of service and hence helping the market to be further advanced. Resource and skill mobilisation in an effective manner helps in developing prospects in the market as well as adding substantially to the economy of the nation. These help to let the gross national product along with per capita income in the place.

As new ideas and innovations keep coming in the market on a daily basis, variety in the market gets a major boost along with prices that are competitive in order to gather better space in the market. It enables people to avail them for leading a better life and without compromising on their budget. It helps boost the standard of living of the people and suddenly the nation becomes a better place to live for even with minimal finances.

The export trade gets a huge boost due to the fact that entrepreneurs produce goods in large quantities and there is enough to be exported to foreign countries. Foreign exchange amount is enhanced with this and thus greater economic independence is achieved. All of these only points towards a single point agenda of national development and financial growth.

The essential target of every entrepreneur is to maximise capital flow with the help of rapid innovations which they come up with. Backward and forward linkages are influenced by these practices and hence better economic growth is achieved. Such linkage theory reflects the fact that meaningful investments are being done in the country and there is a plan behind every step taken financially.

It is a fact that competition in the market is sure to come when there are entrepreneurs vying for the attention of the same consumer base in a market. Several producers in the same domain will make sure that each of them will be in search of better facilities which they can provide to their customers. Also, there will be a price war in the market and the one with the best quality will sustain for the longest period of time. It benefits the customer as they can now afford the services without burning a hole in their pockets.

Entrepreneurs are all about breaking the traditional idea of freedom and further expanding it because the sky is the limit now. The dependency on the lower level of technology and outdated systems are a thing of past as they can be easily replaced with local producers or through imports. The under developed countries are getting access to high end technology to get the work done and as a result they are coming up with new goods and ideas. It is economically viable to them because the cost of living is low for people based in underdeveloped countries. The economic freedom they get along with the wide array of choice make it the best-suited system of production in any given economic set up.

On the other hand, there are always grimmest to any positive aspect. As flawless the system may look on the outset, it is difficult to master in reality unless you are a crafter agent in the domain. Proper education and sense of the market has to be imbibed in a person before they are ready to wave off their entrepreneurial venture. If they fail, then it is a massive financial loss for the person and also the employed people will find it hard to get their salaries. Additionally, the resource base of the country is stressed with such initiatives. Over exploitation of natural resources are always a threat and it can lead to serious consequences later on. After careful consideration of all aspects, entrepreneurs are truly the catalyst of change in a society and our country has benefitted from them to a considerable extent. These ventures meet the gaps that are present in the market and hence pave the way for development in the nation. The Indian Government needs to try and extend their help in allowing people to set up their own projects by introducing laws and policies in their favour. The entrepreneurial ecosystem can only flourish faster with the help of the government. People can be against the idea of capitalism but then through entrepreneurship, the owners are willing to put money in the pockets of others either directly or through other means, no one should oppose such a force. With proper nourishing and a balanced approach, it is assured that entrepreneurship will keep the country happy and boost the economy to new heights. For now, the secret to getting ahead clearly remains to firstly get started!

5 Smart Measure To Prevent Shoplifting In Your Store

Coming from Kolkata, Vivek Choudhury has graduated with English Honours and has a Master degree in Mass communication. He is an effective web-content and blog writer, with over 2 years of experience in the field. He is known for his ability to spin magic with words. Travel, e-commerce, fiction, academic, communication or technical, his genre of writing is as varied as it can get. Additionally, he is a short-film maker with active interest in visual media and entertainment industry. Reach out to him at [email protected] Or give a call @ +91-8981439810

How Can Small Businesses Grow with ERP?

What Every Parent Must Know About Cognitive And Educational Assessment?

Best places to start a family in Canada

7 Appliances You Need In Your Rental Property

How to Dress Your Home When Preparing It for the Market

6 Savings Habits that Will See You Reach Your Goal

How to Raise Money to Purchase an Industrial Property

5 Tips for Installing a New Fence

What Are The 3 Professions That Can Hunt The Mobile App Development Industry?

12 Major Causes to Rely On a Foundation Structural Engineer