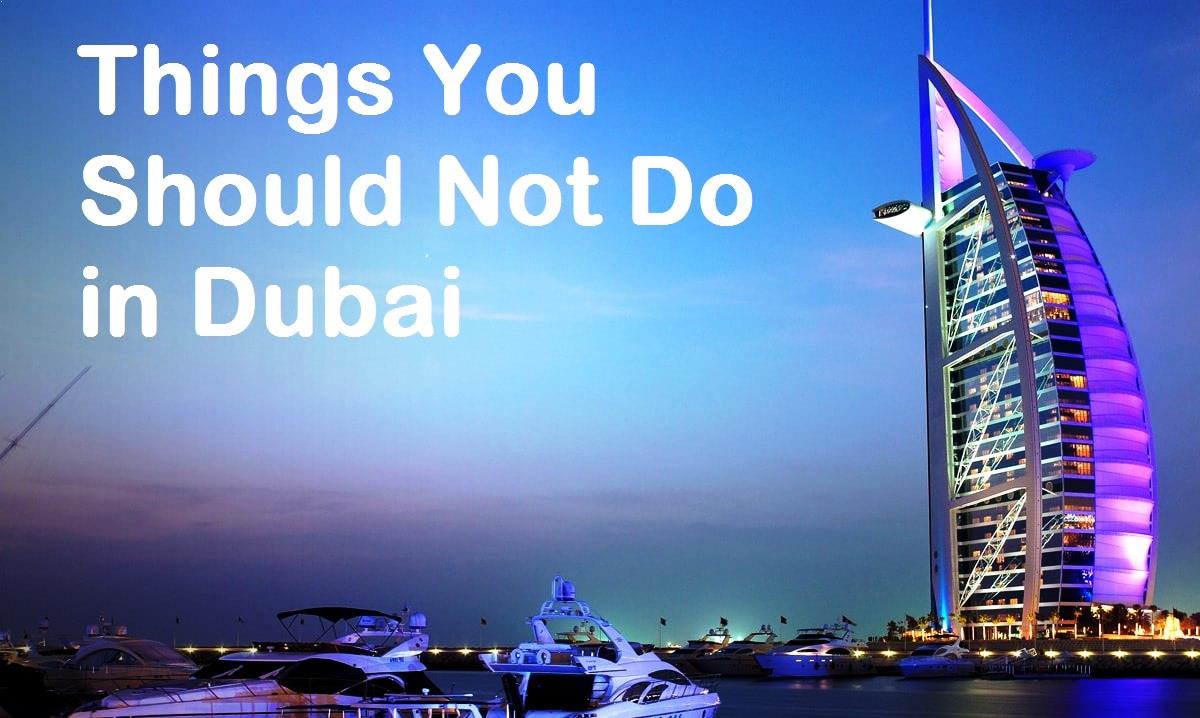 Dubai is one of the most charming and traveller’s favourite spot. Dubai is the most exciting place in the Persian Gulf with full of skyscrapers, luxury hotels and expensive cars. It may look like a Vegas in the Middle East, but it is not the same.

This enormous city is one of the most relaxed, liberal and permissive places in the region but you have to keep yourself in control here. If you are coming from the Europe or America, things that would be appropriate in your countries might be inappropriate here and even illegal.

Moreover, this is the city which is very strict in their rules and regulations, and this is one of the places where the death penalty still exist. That is why if you have a plan of doing a desert safari in the Dubai, then this blog is important to read for you so you can know that the things that you should avoid doing in Dubai.

You may find some of the most expensive wines in the Dubai, but that doesn’t mean that you can drink it in public. Dubai is one of the most alcohol consuming city in the Muslim world, but still, it doesn’t like to show it off publicly.

That is why you should respect this rule and should not cross the line or else you could face some serious charges from the Dubai authorities.

However, you can drink as much as you want in your home or the room of the hotel after getting a license for drinking. Yes, you need to have a license to drink alcohol which you can get from online or from the liquor shop.

The laws of Dubai is even stricter on drugs. Dubai has zero tolerance policy on all sorts of drugs selling, possession and use. It is important to read about the illegal substance possession policies of the Dubai before travelling there.

Once some people flew from the Amsterdam with the pot in their system which is legal in Amsterdam but were jailed in the Dubai because they failed the drug test. This is how Dubai is serious on drug smuggling.

Take as many photos of Burj Khalifa and Burj Al Arab as you want, but do not take the pictures of the locals. Taking pictures of the local in their dresses is like a ritual of every traveller as a photographic souvenir of their trip.But you should not celebrate this ritual in Dubai.

However, you can take the photos of the immigrants, but the locals don’t like this at all. You have to be respectful to the locals because they consider this as rude and intrusive especially if you shoot the photo of any local woman without her approval.

No Display of Affection

It is considered to be indecent to show any affection towards your loved ones even if you are husband and wife. I can understand the feelings of a couple when on the honeymoon or vacations trips but you have to keep your make-out session completely private, or else you could get in big trouble.

A few years back a British couple caught having sex on the beach, and they were sent to jail for this. Even minor displays of affection can get you in trouble so keep this in mind of your next Dubai trip.

Think Before You Speak

You have to keep your tongue in control when you are within the boundaries of the Dubai. Once a tourist was charged just using the “f” word to the undercover police officer in Dubai.

Moreover, doesn’t matter how big you are a supporter of freedom of speech, you should not say a single word against Islam and the Muslims their or else you will be forced to spend the years with only Muslim prisoners in the Muslim jail.

Bite your tongue before using it for insult, profanity and vulgar language and keep it to yourself. The Dubai authorities consider it as a severe offence, and many tourists have been jailed just because of using the non-acceptable words in Dubai.

Moreover, you also cannot do any hate speech or say something against to the royal families or even prominent Emirati Businessmen. All of your opinions and insights should be kept remain in your chest until the time you are in Dubai.

Almost every big fashion brand in the world has his existence in the Dubai, and it is considered to be the most stylish cosmopolitan city in the world. But still, there are some restrictions on men and women dressing. First, nudity is not allowed in the public places.

Women cannot go topless outside, and the men should keep their six packs (if any) covered under their shirt. Moreover, women cannot wear tight, short, low-cut and all sorts of suggestive and seductive dresses in public.

The interpretation of this rule varies to the different departments of the Dubai but if you want to save yourself from any problem, wear only those clothes who does not flash a lot of skin and curves.

Author Bio: Shirley has recently completed her graduation in English Literature from the University of Michigan. She is currently working for the company that provides quality help with thesis to the students, not only from the United States but from all over the World.

Getting Airline Tickets with the Best Deals to Save Money