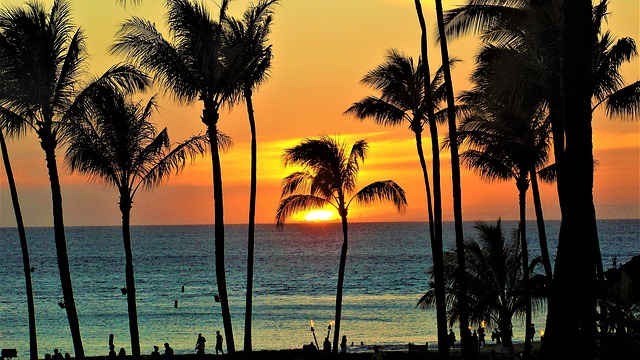 Whether you are considering moving to Hawaii or just traveling there, your first question is probably going to be: ‘what is the weather like in Hawaii?’ Well, the answer to this question is rather easy since there are no bad weather days in Hawaii. Most days you will either be kissed by the sun or by some gentle rain. Moreover, here you can enjoy only two seasons, winter (hooilo) and summer (kau). You will be affected by the drier weather from May to October, and the rainier weather from November to March. In summer the temperature at the beach is around 80 degrees Fahrenheit or around 30 degrees Celsius. And in winter, it is similar – 70 degrees Fahrenheit or 25 degrees Celsius. Also, you can see snow at the summit of Mauna Kea on the Big Island. Basically, it all depends on the location and part of the year.

The Weather on the Big Island

This is the part of Hawaii that has the most diverse climate. It is because it contains more than 10 different climate zones. In Kona, which is moku or a district on the Big Island, the usual temperature is around 80 degrees Fahrenheit or 27 degrees Celsius all year round. But, on the higher peaks of the island, like Manua Kea, you can see snow in the winter season. And, when it comes to precipitation, Kona is a rather dry district, while in Hilo you should be prepared for lots of rain. Although the temperature is rather diverse, the lifestyle here is very stable, and many claim that this is one of the best places to start over.

The Weather in Kauai

This part of Hawaii has a rather stable climate all year round. It is a true tropical place. Temperature ranges from  80 and 85 degrees Fahrenheit or 27 and 29 degrees Celsius. The temperature on the mountains is chilly and sometimes goes below 50 degrees Fahrenheit or 10 degrees Celsius. The most visited place in Kauai is the unincorporated community called Lihue. Lihue has the most pleasant weather conditions in Kauai.

The Weather in Oahu

In Oahu, you will encounter a semi-arid, tropical climate. In summer, temperature ranges from 80 degrees Fahrenheit or 27 degrees Celsius to 90 degrees Fahrenheit or 32 degrees Celsius. Summers are dry and hot, while winters are foggy and still very warm. Honolulu is the most visited place in Oahu, and many people claim that is the perfect vacation spot. Both natives and foreigners love this city, which is also the capital and largest city of the U.S. state of Hawaii.

The Weather in Maui

Even though, Maui is a rather small island it has a wide range of different climates and weather patterns. Mainly, it has a tropical climate and it is known for its warm sunshine and really high humidity. Throughout the year, you can experience temperature that goes from 75 to 90 degrees Fahrenheit or 24 to 32 degrees Celsius. But it is not strange to have winter days which are up to 20 degrees cooler, although very rarely.

The Weather in Molokai

Molokai, a small island in Hawaii, has the perfect climate. It is warm and stable. The usual temperature is 75 degrees Fahrenheit or 24 degrees Celsius, and it seldom goes lower or higher than that. There is more humidity in winter, but when it comes to spring, summer, and autumn, you can enjoy warmer weather, with no rain, but an occasional trade wind.

Unfortunately, when planning on moving to Hawaii, or just traveling there, you have to be prepared for hurricanes. For all the Hawaiian islands, hurricane season is from June till November. The most common time of their appearance is from July through September. The latest hurricane to hit Hawaii was the Hurricane Inki. Inki created terrible damage. Combination of heavy rains with strong winds can make dreadful destruction, and be extremely dangerous.

Vog is something that you can only experience in Hawaii. That is an atmospheric effect caused by emissions of the Kilauea volcano. Kilauea volcano is located on the Big Island of Hawaii. It looks like a hazy atmospheric condition and it is known as volcanic smog or vog. For most Hawaiian residents, vog is just a small inconvenience, and it is something that everybody is used to. However, before you call www.wailemovers.com and start packing your bags, bear in mind that vog can affect people with chronic diseases such as emphysema and asthma. Remember to consult your doctor before you move!

During summer, Hawaii has the perfect weather across the board. As previously mentioned, the temperature is approximately around 85 degrees Fahrenheit or 29 degrees Celsius. Summer is also the beginning of the dry season, so you do not have to worry about humidity much. However, the dry season does not mean you will be safe from hurricanes. They are most common during the summer. Moreover, if possible, stay away from the hottest two months – August and September. And when packing for Hawaii bring breathable clothes as well as waterproof gear and a wetsuit.

Winter season starts from November and lasts all the way to April. But, the temperatures are not that different compared to those in the summer season. On average, 78 degrees Fahrenheit or 26 degrees Celsius. However, what makes it different than summer is the rain. Rain is common for the winter season. Also, it is worth mentioning, that in winter, water temperatures do not drop at all, but the surf is much higher, thus making swimming riskier. When packing for your winter vacation in Hawaii, bring your summer clothes. Sunscreen, swimsuits and breathable clothes are a must.  Also, if you plan to go hiking or mountain climbing, you will need something warmer, as temperatures can really drop on those higher peaks.

Related Topics:moving to Hawaii
Up Next

Annoying Things You do in Taxis