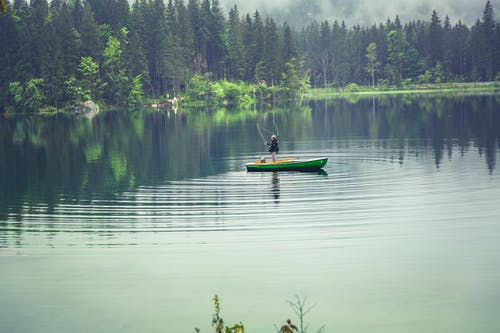 So, you’ve got your rods ready, your flies all set, and your gear in order, but where to go? There are so many awesome places for fly-fishing across the globe, and, while you might get to most of them in the future, you have to start somewhere.

Let us help you with your indecisiveness. If you’re looking for a spot to remember, this little article contains the five of the most incredible places where you can chill, relax, take in the scenery, then meet a slippery scaly opponent while knees deep in cold water worthy of your time and skill. Let’s check them out!

If you don’t mind the cold and the obnoxiously nice people, then Northern Saskatchewan, Canada, is the place to go. Though Saskatchewan is devoid of any significant bodies of water, it hosts plenty of rivers, lakes, and streams, all of which lend themselves perfectly for fly-fishing. Northern Saskatchewan’s waters hold plenty of lake and rainbow trout, as well as pike and walleye, all of which make a worthy prize to any angler determined enough to find them.

One of the best features of Northern Saskatchewan is its diversity when it comes to fishing spots. Most of them are accessible by car, though fly-in options are the way to go if you’re looking to hit the best possible spots. On top of that, Northern Saskatchewan has plenty of nooks and crannies not yet fully explored by anglers, so you can always find a good, quiet spot to call your own.

When it comes to breath-taking nature and incredible fishing spots, the US is simply blessed. If you’re planning a trip to the good ole’ U.S. of A, then you should definitely head toward Montana. The Big Sky Country is one of the prime spots for nature-loving sightseers and anglers alike. With over 3000 lakes and rivers, Montana hosts some of the biggest angling industries in the US and the world. And the best place to fish? Madison River.

If you’re looking for a trout to catch, then Madison River is the place to go. The river is home to an incredibly dense population of fish, most of which are trout, so even the most inexperienced angler can find a trophy fish to take a picture of and bring home, while the experienced fishermen can find plenty of good spots too where they can catch their colossus in solitude. With that being said, summer is the best season to go visit, as the fish are the most populous and in their prime, though expect a solid population of anglers there too, so be ready to make some friends.

You may think of the Land Down Under as an arid, lifeless place where every bit of flora and fauna is out to get you – and you’d be right, for the most part. But, just a little south of the continent is an island not many picks as their first choice for fly-fishing, but that island is, in fact, a true fisherman’s paradise. That island in Tasmania.

Fly-fishing in Tasmania is an incredibly lucrative industry and a must-see for any serious angler. Among the many places where one can satisfy one’s hunger for scenic atmosphere and spirited fish, Penstock Lagoon is a must-see. The lagoon was built in the early 1900s, and, to this day, it remains an exclusive fly-fishing waterway. Brown and rainbow trout frequent the waters of Penstock Lagoon, and the early season is prime time for dry fly-fishing. There are also plenty of places to camp too if you’re into that sort of thing.

Now, if you’re looking for a more exotic place to visit, then the Eg-Urr River in Mongolia is the place for you. Mongolia has opened itself relatively recently for fly-fishing, so not many people know about Eg-Urr River and its many treasures. This means there are plenty of spots to explore and to fish in peace and quiet, as well as plenty of fish to be caught. As far as the species of fish are considered, you’re looking at a taimen, one of the largest species of trout, some of which can weigh up to 60 pounds! Now, how’s that for a trophy fish!

With Eg-Urr being a recent discovery, the biggest problem, of course, will be finding a guide. However, if you’re diligent and determined enough, you can find a good guide or two that will show you all the best spots. With that being said, the steppes of Mongolia can be a rather cold place, so be sure to pack something warm to put on your back.

Enough with the cold, in with the tropical! If you’re looking for an exotic saltwater fish to catch, then you should be heading straight to Iztapa, Guatemala. Iztapa is one of the absolute favorites among anglers worldwide, and it’s definitely a place you’ll recommend to your fly-fishing friends. With that being said, there are plenty of guides and firms that offer their services to newcomers and experienced fishermen alike, so there’s no shortage of professional help when it comes to finding the best spots to cast your line.

As for the prey, you’re looking at tuna, marlin, and dorado. However, by far the most populous and popular fish are the sailfish. These spirited animals will put up quite a fight, so be ready for a damn good challenge, and you’ll definitely be the envy of all your friends once you show them a picture of you holding a capital specimen in your hands.

And that’s it for our top 5 places to do some fly-fishing. As we said, there are many more out there, but, if you’re looking for incredible nature, good fish and an adventure you’ll remember for years to come, these five places are your best bet for all these things. All that remains now is for you to pick up your gear, book a flight and your prize will be in your hands before you know it!

Neil is an automotive&travel journalist from Sydney, Australia. Combining journalism with traveling and cars was his intention since he was a kid. Huge soccer fan.

Writing Files In Nodejs? Here Is What You Need To Know.